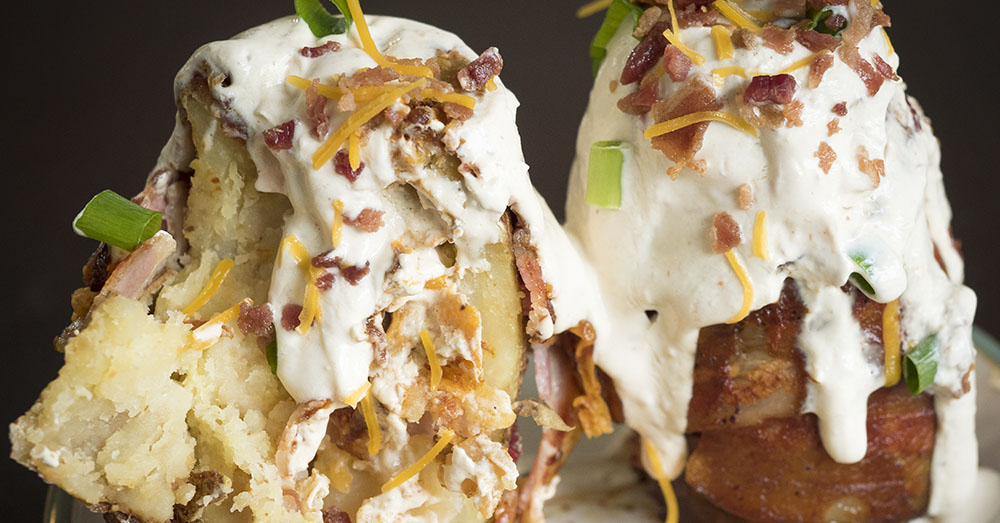 These loaded potatoes are so much fun to make – and to eat!

Baked potatoes are always a crowd pleaser, especially “fully loaded” baked potatoes, with bacon, sour cream, cheddar cheese and chives. We thought it would be fun to turn the traditional baked potato recipe upside down, and boy did we get some oohs and ahhs when these popped out of the oven! These are downright impressive to look at, and will definitely require a fork and knife. We wanted something that would still give us that loaded baked potato experience but on a grander scale, and to that end we decided to make baked potato volcanoes.

A little creativity goes a long way, and these potatoes show how some imagination can take food to another level. We hollowed out the baked potato, stood it on its end, and filled it with all kinds of goodness. To make it even more volcanic, we added barbecue sauce poured over the sides in an epic lava flow of flavor. Then a “snow capped” topping of sour cream (jazzed up with a little hot sauce for some heat) and we’ve got an impressive potato peak that explodes with flavor. Whether it’s for the big game or for a fun way to jazz up a weeknight dinner, our volcanic baked potatoes are definitely a hit. You’ve probably never had tots quite like this before!

Recipe adapted from BBQ FOOD 4 U