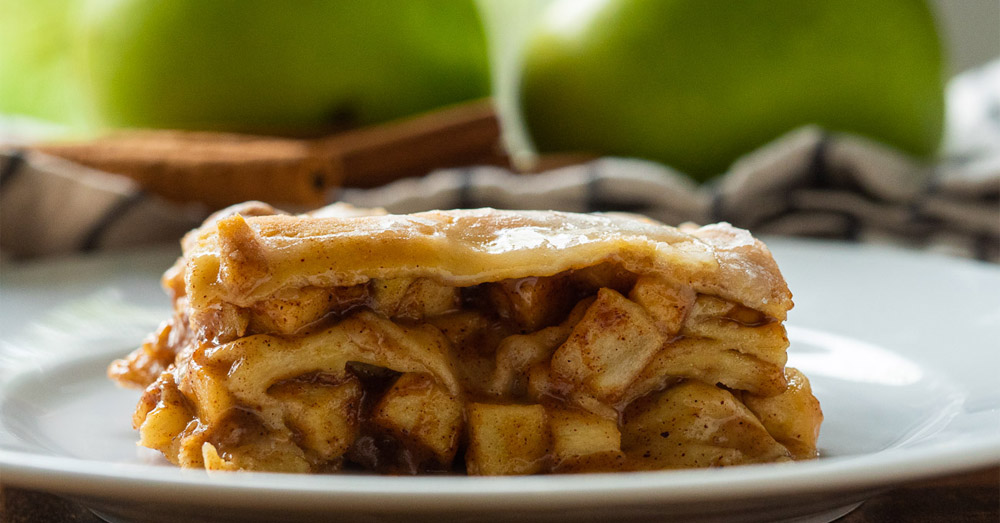 This is unlike any lasagna I’ve ever had before…

Fall is my favorite season. I love that the weather is cooler without being bitter cold like winter, the beautiful colors, the longer nights spent curled up with a cup of cocoa, and of course, the flavors of the season! Most people opt for pumpkin spice, but I’m a cinnamon apple girl through and through. There’s just something about juicy apples with their tart, slightly sweet flavor paired with the spicy, earthiness of cinnamon that brings back memories of autumns past.

I’m always looking for new cinnamon apple recipes, and trust me, this one does not disappoint. With layers of tart apples, sweet caramel, and buttery, savory cinnamon rolls, what’s not to love? Keep reading to see just how easy this Apple Cinnamon Roll Lasagna is to make!

You might be wary of a dessert with “lasagna” in the title, but there’s no meat sauce or noodles found here. Just layers of deliciousness with a sweet icing drizzled on top! With only 7 ingredients, this dish not only comes together in a snap, but it doesn’t have a laundry list of items to buy at the grocery store. The recipe is made even easier by using refrigerated cinnamon rolls.

Start by preheating the oven to 375, and spraying a 9×13 baking dish. Dice up 4 large apples – Granny Smith or Golden Delicious work best for this recipe, but if you have another favorite apple, go for it! Toss the apple chunks with sugar, corn starch, cinnamon, and nutmeg, making sure to coat evenly.

Then, cut the cinnamon rolls into 1/4-inch thick slices. Sprinkle each piece with flour and roll each piece on a floured surface until thin. Arrange the first layer of flattened cinnamon rolls at the bottom and sides of the dish. Press them with your hands to seal them well.

This dessert will be piping hot when it comes out of the oven, so let it cool for a bit before drizzling the icing from the canned cinnamon rolls on top. Serve up warm! You’re going to love this tasty fall treat. Get the full recipe and ingredient list below!