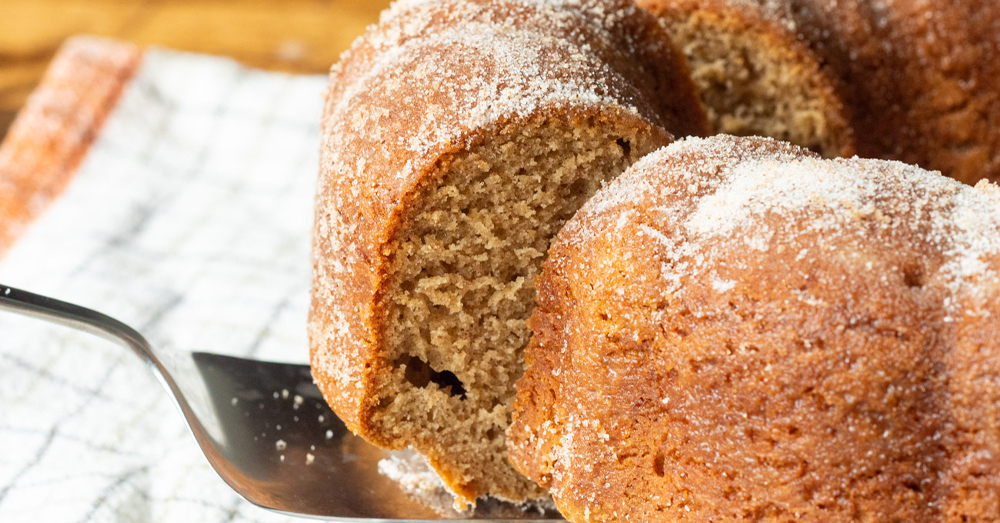 A giant sliceable, sharable version of an Apple Cider Doughnut.

Are Apple Cider Doughnuts the best thing about fall? Arguable, but they’re certainly a top contender. And this simple bundt cake? Well, it’s kind of like an Apple Cider Doughnut on steroids. Or at least one you can slice up and serve to all of your favorite people. And sharing is caring, after all.

The crumb here is a little bit lighter than the cakey texture of an Apple Cider Doughnut but I wouldn’t call it fluffy. The batter is made up of the usual baking suspects – flour, baking powder, sugar, eggs etc. – but also relies on cinnamon, apple cider, and applesauce for flavor.

In other words, it has that sort of autumnal sweetly spiced flavor we all know and love. It’s also dusted with cinnamon-sugar but only after being brushed with melted butter to ensure it sticks.

It’s much the same experience as a traditional Apple Cider Doughnut, what with all that apple flavor and the cinnamon-sugar crunch, it’s just in a slice-able, sharable form that you can enjoy right in your home kitchen!