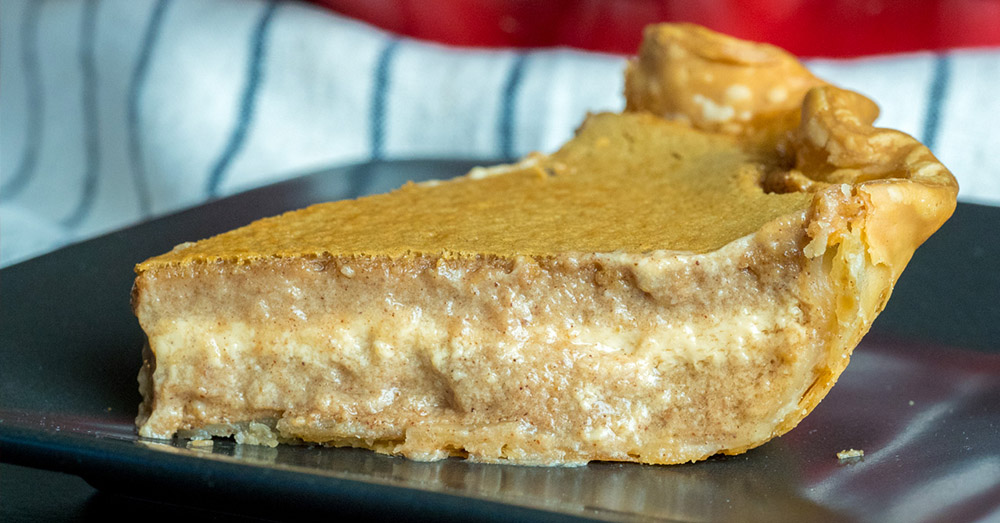 ‘Tis the season for all things pumpkin. Pies, lattes, cookies, the list goes on and on. Don’t get me wrong, I love tasty pumpkin treats as much as the next person, but I think I may have a new favorite autumn pie… Apple Butter!

This pie has the same basic texture as pumpkin pie as well as the familiar, comforting hint of cinnamon and sugar, but with a twist. Instead of canned pumpkin, we used apple butter.

Now, before we dive any deeper into this recipe, let’s talk about apple butter. It’s important to note that not all apple butter is created equal. Most kinds of apple butter will work just fine, but you’ll get slightly different results depending on the brand and sugar content.

The safest bet is to go with a thicker apple butter to try and replicate the texture of canned pumpkin.

Okay, now that we have that out of the way, let’s take a look at how simple this recipe is. We start with a refrigerated crust, which automatically shaves off a lot of prep time. You can, of course, make your own crust if you so desire, but the refrigerated stuff works just as well!

After you have the crust rolled out and placed into your greased pie plate, go ahead and mix eggs, sugar, cinnamon, apple butter, and a healthy dose of milk in a large bowl. Ready for the tricky part? Pour the mixture directly into the prepared pan and bake for 1 hour at 375°. It’s really that easy!

My favorite thing about this pie (aside from the deliciousness, of course), is the pretty stripe in the middle. It looks like you spent a lot of time layering and mixing ingredients, but now you know the truth – this pie magically makes the stripe all on its own!

Don’t believe me? Try it out for yourself!