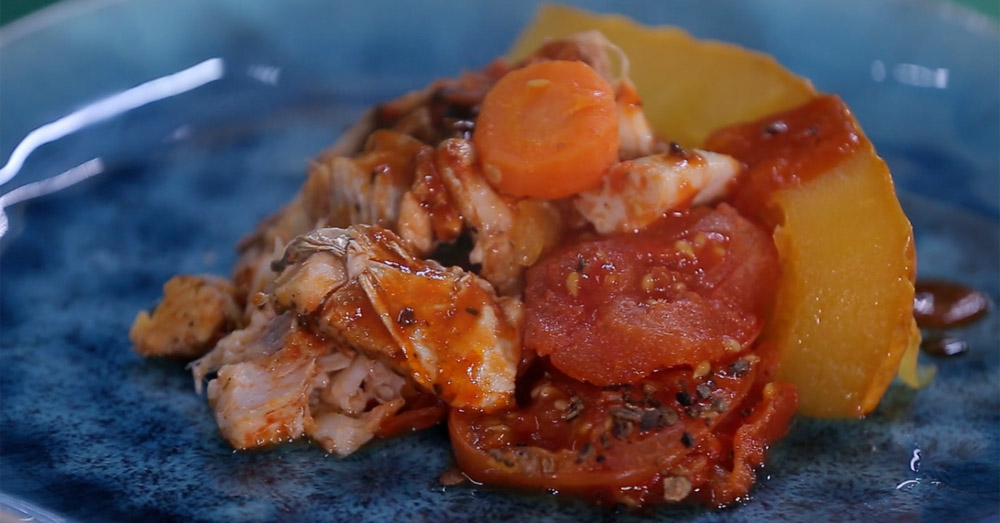 The fish cooks right inside the pumpkin! Delish!

Ready for another unique and tasty meal from Armenia? This recipe calls for whitefish, a few roasted veggies, and big ol’ pumpkin. That’s right! You’ll start by cutting a medium-sized opening in the pumpkin and scraping out the insides. After searing the fish and veggies, you’ll whip up a deliciously sweet and seasoned sauce made from honey, butter, and an assortment of spices.

Here’s my favorite part… stuffing the pumpkin! The seared fish, carrots, and tomatoes, along with the sauce, are placed inside the pumpkin and baked. The end result is a slightly sweet, perfectly seasoned, tender fish. See how it all comes together in the video below!

To get started on this tasty international dish, preheat the oven to 350F. Spray a pan with cooking spray and set aside. Next, make an oval cut on one side of the pumpkin and keep it as we will use it as a lid. Remove all the seeds and fibers with a spoon or an ice cream scoop and put the pumpkin aside.

Prepare the whitefish by removing the head and tail. Cut the rest of the fish into 1-inch slices. Add fish, the remaining 1/2 tablespoon of salt, the remaining 1 teaspoon of allspice, and 2 teaspoons dried thyme to the same skillet. Fry on both sides for 1-2 minutes. Add tomato paste, chili pepper, honey, butter, bay leaves and boiling water and stew for 1 to 2 minutes.

If you’re in the mood for something a little different, this is definitely the recipe for you! Check out the ingredient list and instructions below.