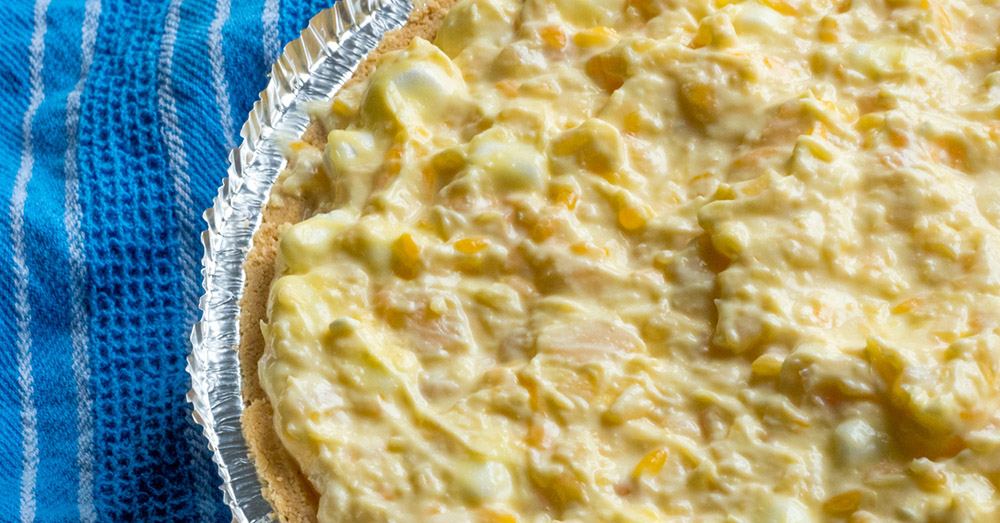 The vintage classic, now with a sweet and crunchy crust!

While I was growing up, my mom made ambrosia every year on Thanksgiving and only on Thanksgiving, but my sister and I only ever referred to it as “marshmallow salad.” And that is a pretty accurate description since it’s a cool and creamy medley of ingredients where marshmallow is rather prominent. This pie takes that vintage classic and pairs it with a crunchy graham cracker crust, which turns out to be the little touch of texture contrast that maybe it was always missing.

I know that people make ambrosia differently all over the United States, but this lineup is the way my mom and grandma went about it – crushed pineapple, canned mandarin oranges, chewy coconut, and fluffy marshmallows folded into a bit of sour cream. The sour cream adds the perfect tang against the other sweet ingredients and the marshmallows start to break down a bit in the juice and plump up in all that flavor.

This pie version also includes some instant vanilla pudding mix, which transforms it into something that’s sliceable when chilled. All there is to do is stir those ingredients together and then tuck them into a pre-made graham cracker crust and set it in the fridge until it’s firmed up a bit. It’s the same cool and creamy flavor as my mom’s ambrosia, but in pie form, it feels like something that makes as much sense as a cooling treat on your average summer day as it does on your holiday table. Sweet, creamy, and soft with a crunchy base to back it up, it’s the type of dessert that’ll never go out of style.

Recipe adapted from Spend With Pennies.