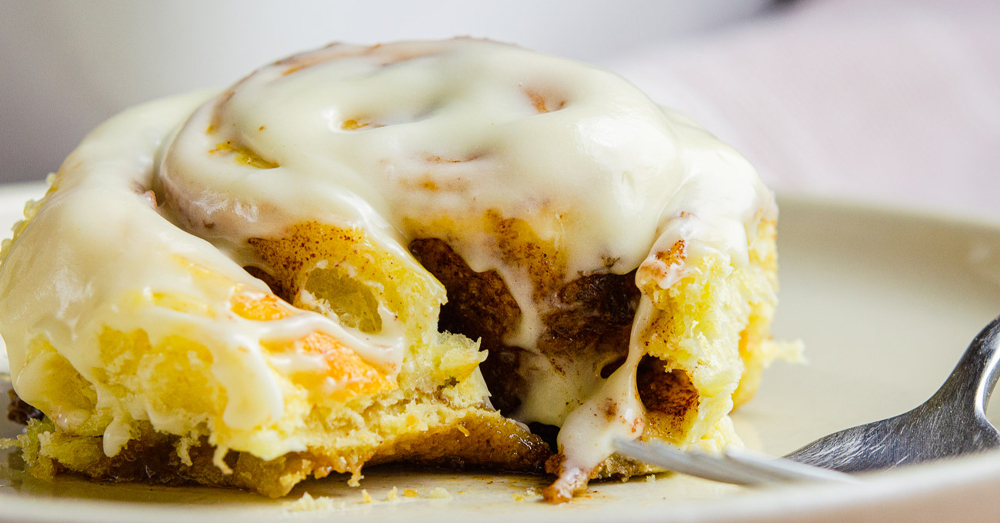 As indulgent as you want a cinnamon roll to be, but so easy to make.

There is nothing better than a homemade cinnamon roll. Maybe that’s an exaggeration, but that’s what I think every time I bite into one. The trouble is, homemade cinnamon rolls are often a complicated matter, sometimes involving an overnight rise or at least a double rise during the daylight hours. That’s exactly why I usually reserve them for special occasions like Christmas morning or when loved ones are visiting… but no longer! Not with this recipe – this recipe gets you doughy, delicious homemade cinnamon rolls in just 90 minutes so you can have them on any average weekend.

The process is very similar, but there’s no need for hours of rising time here. The dough starts with heated milk and butter, but don’t add the liquid to the rest of your ingredients until it’s cooled to lukewarm or it will nuke your yeast. Once you’ve kneaded everything together, let the dough rest for ten minutes or so and then roll it out into a big rectangle.

Brush the top with softened butter, sprinkle it with a generous amount of brown sugar and cinnamon and roll the whole thing up, forming a tight spiral. Cut it into twelve little rolls…

… and let them hang out in a baking dish in a warm spot until they’ve doubled in size.

That will take about thirty minutes, depending on how warm your room is, and they’ll look something like this.

They’ll puff up even more when baking and you end up with pillowy, soft rolls that are a dream to bite into. I’ve paired them with a cream cheese frosting because as far as I’m concerned, there’s just nothing better to top a cinnamon roll.

These taste as indulgent and special as you want a fresh, warm cinnamon roll to taste, and yet they don’t take up your whole day (and night!) to make. I guess you could make the case that special indulgences are best left for occasional enjoyment, but these are so easy that you’ll have a hard time not making them again and again and again.

Recipe adapted from The Baker Chick.