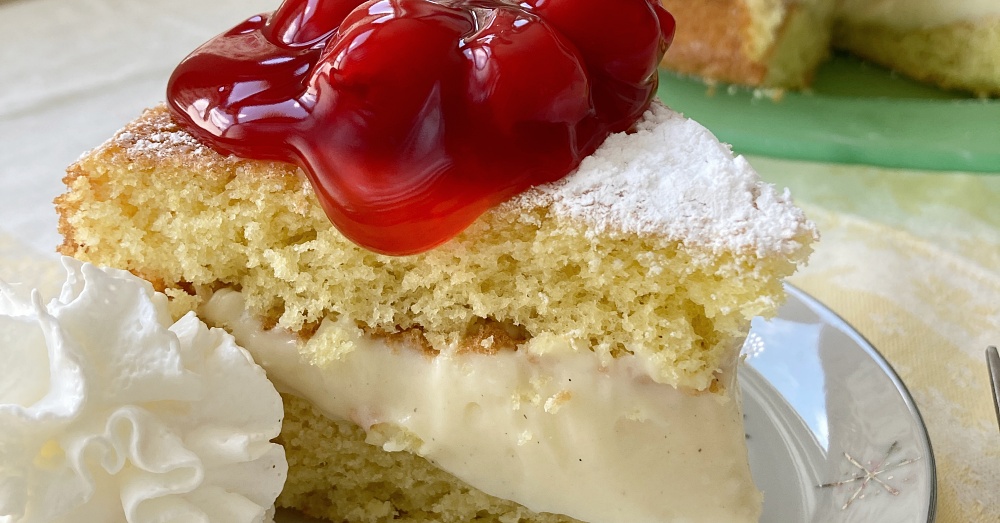 A refreshingly simple cake with a classic flavor.

Despite the name this tasty dessert is certainly not a pie. However, we’ll let that minor detail slide since this is a true American classic. This rich yellow cake is like a bigger version of shortcakes, but instead of strawberries this luscious layer cake is filled with a vanilla pudding and finished with a cherry topping. We’ve got a couple of shortcuts with this recipe that make it a really easy one to whip up anytime.

Our modern version is light, sweet, and full of flavor thanks to the filling and the topping. It’s a wonderful recipe for any time of year- but is especially welcome in summer.

To begin making this recipe you’ll need to cut out circles of wax paper to line 2 8″ cake pans. This is to make sure the cakes release properly after baking.

Once the cakes are baked and cooled you’ll be using the first of our quick tricks for the filling. Instead of making a custard from scratch we’re using an instant vanilla pudding mix instead. I like the “gourmet” style instant mixes that have real vanilla in them. The white chocolate pudding mixes also work well for this this recipe.

We’re using just a little bit less milk than is noted on the package directions so that the filling doesn’t run out as much when you cut into the cake.

Once the layers are assembled, simply give the cake a good dusting of powdered sugar. Serve each slice with a bit of canned cherry pie filling (our second shortcut) and some whipped cream. Or, you can use some jam, some homemade fruit sauce, or just plain fresh fruit. That’s what makes this a great dessert as you can change the recipe to use up seasonal fruits or what you have in the cupboard.

If you can look past the name this “pie” is a wonderful cake that has a simple yet satisfying flavor profile.

For the filling and topping: