20 minutes active, up to 2 hours inactive 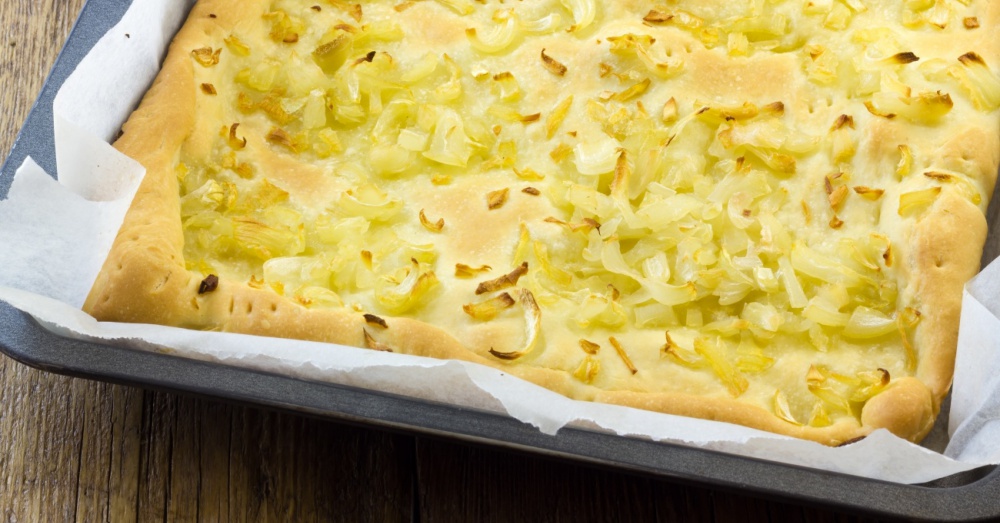 So easy, and so tasty!

Breadmaking is one of those cooking tasks that can seem rather intimidating. There’s the yeast, and the rising, and the kneading, and even more rising… and that can seem like a lot. It can even make you feel like you should just avoid bread-baking altogether. But you definitely should not do that. Because there’s so much joy in baking bread! And because there are breads out there as easy and delicious as this Sweet Onion Focaccia!

Focaccia is a great starter bread because it’s forgiving. It doesn’t require any kneading or shaping, and you can let it rise a little, or you can let it rise a lot. It’s versatile: you can top it with cheese, olives, herbs… you name it. And while it makes pretty awesome pressed sandwiches, it also goes perfectly served right alongside most dinners.

We’ve kept this particular focaccia pretty simple. Most of its flavor comes from the sweet onions that top it, though the extra sprinkling of salt goes a long way. You want to make sure you use sweet onions like Vidalia or Walla Walla; anything else will be a bit too sharp unless you take the time to caramelize them first. (Though, that’s totally another great way to flavor focaccia.)

You can make this in a stand mixer or mix it up by hand. If you’re doing it by hand, it takes a bit of kneading just to get the dough nice and smooth, but it’s not enough to give you any new arm muscles, so don’t let that stop you. You can let the dough rise as little as 30 minutes, though if you let it sit as long as 90 minutes, you’ll have a lighter, fluffier bread in the end. Either way, it’s a real savory treat, and we bet you’ll be baking bread much more than you have been. Enjoy!

20 minutes active, up to 2 hours inactive