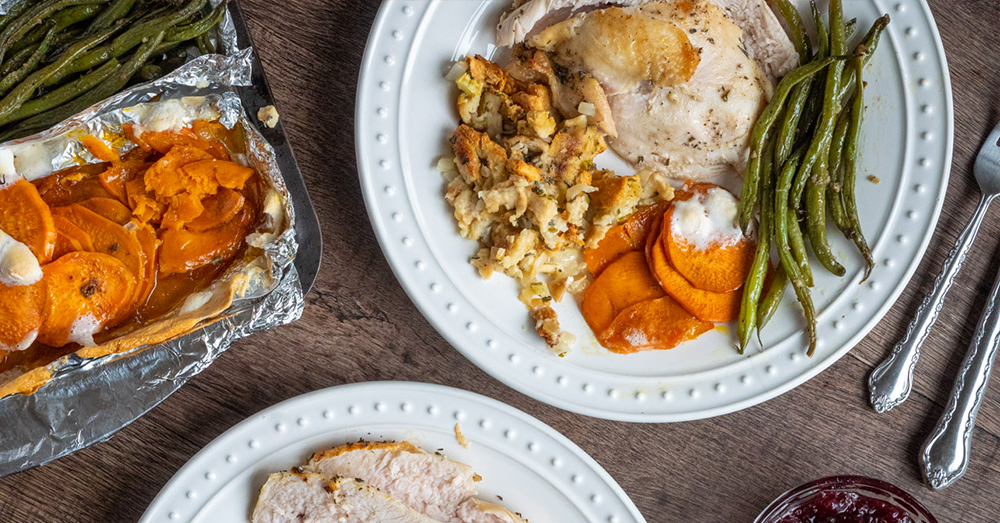 Thanksgiving comes around every year but that doesn’t always mean that you’re cooking for a crowd. But going it solo or celebrating with a small group is no reason to skip the feast, so we’ve got one for you on a smaller scale. Perfect for four (or two if you’re really fond of leftovers) our Sheet Pan Thanksgiving Dinner gives you an entire Thanksgiving feast on a single sheet pan with little more than an hour of effort from you. There are all the staples you look forward to – juicy turkey, brown sugar and marshmallow-topped sweet potatoes, fresh green beans, and plenty of savory stuffing. Just add some gravy and cranberry sauce and you’re ready to dig in and give thanks!

I have been known to create multiple spreadsheets to manage the preparation needs and cooking times of the (perhaps overzealous) number of dishes I’m making for Thanksgiving. It doesn’t stress me out – quite the contrary, it’s where I shine… it’s like my super bowl. But life doesn’t always allow for multiple days of cooking or call for so many serving platters and bowls that there’s little room to actually sit at the table. Sometimes something simpler, but every bit as celebratory, is more in order and that’s where this easy sheet pan feast comes in.

You’ll be making your own stuffing (or dressing, really, since you’re not putting it in the bird) and relying on a bone-in turkey breast to cut down on your cooking time. While the cooking time on that is much shorter than a whole bird, it still takes longer than the other components so you’re going to create three trays out of aluminum foil so you can easily add your sides to the sheet pan later on. Get your stuffing and the turkey breast on the sheet pan and pop it in the oven for thirty minutes while you work on the green beans and sweet potatoes.

You want the sweet potatoes to be thinly sliced so that they’ll cook through in about twenty minutes of baking time. You’ll toss them in some melted butter, brown sugar, and cinnamon and line them up in one of the foil trays before topping them with more brown sugar and some mini marshmallows. (My favorite part of Thanksgiving as a kid was the puffy marshmallows my mom put on top of the sweet potatoes, so I’m not forgoing those for even the simplest of Thanksgivings!)

The green beans are even simpler – just a mixture of olive oil, garlic, and trimmed green beans. Toss it all together and pop it on the last of the foil trays before you add both of them to the sheet pan and return it to the oven. In about twenty minutes, the sweet potatoes should be tender and the turkey should be cooked through, but if anything needs additional baking time you can easily remove one of the trays and let the rest continue baking so nothing gets overcooked.

It’s all of the classics on a single sheet pan. It’s the easiest Thanksgiving dinner I’ve ever seen but it’s just as satisfying!

For the sweet potatoes:

For the green beans: