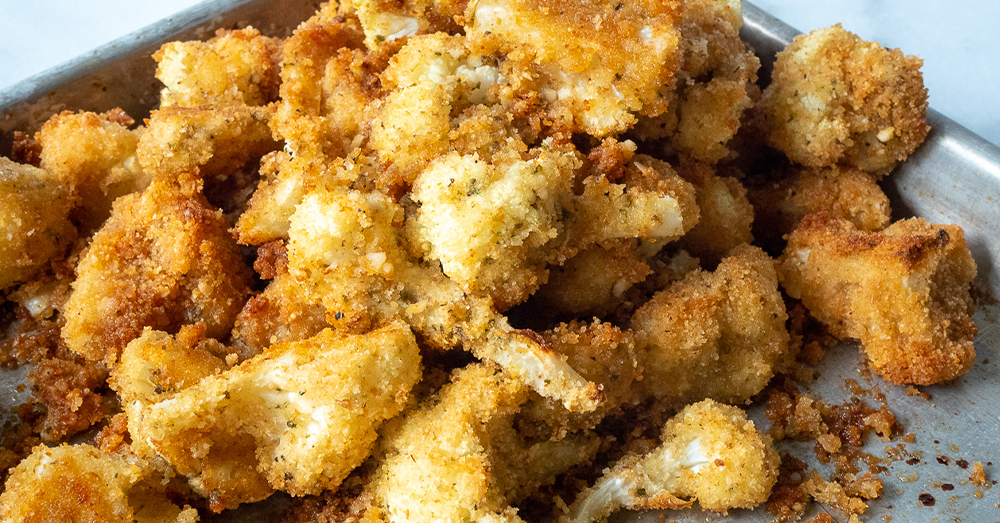 Cauliflower at its very best.

Cauliflower is everywhere. It has earned a reputation as a stand-in for so many other things: rice, mashed potatoes, tortillas, pizza crust… you name it. But I like my cauliflower the best just as nature intended it — as cauliflower — but I will say that a crispy breadcrumb and some cheese never hurt matters. This Roasted Garlic Parmesan Cauliflower has stolen my heart because it lets cauliflower be itself but just makes it a little extra thanks to a seriously delicious cheesy/crispy coating. If you’ve ever had a problem finding motivation to eat your vegetables (or getting your kids to), those days are over.

You’re going to take some nice fine breadcrumbs and mix them with some parmesan cheese and some salt and pepper. Now, usually, I will harp on grating your own parm, but this is an application where the stuff in the can works just fine so if that’s what you have, don’t stress about it.

You’re going to chop your cauliflower into bite-sized florets. If the florets are too big, slice them in half. You don’t want unwieldy large bites here and if everything is the same size, it cooks through at the same time too. Dip those florets in a mixture of melted butter, Italian seasoning, and three minced cloves of garlic. (I won’t tell if you go with four. Or five. Garlic is something you measure with your heart.)

And then you dip that dripping floret into the breadcrumb mixture; the butter helps the crumbs stick to every nook and cranny. It may seem tedious, but it’s so well worth it and more delicious than an egg wash has ever thought of being.

Spread those babies out on a baking sheet so they’re not touching and bake. (We want them to roast, not steam, after all.)

They’ll get golden brown and wonderfully crisp and come out positively permeated with garlicky, buttery flavor. In other words, it comes out as some of the best darn cauliflower you’ll ever have.