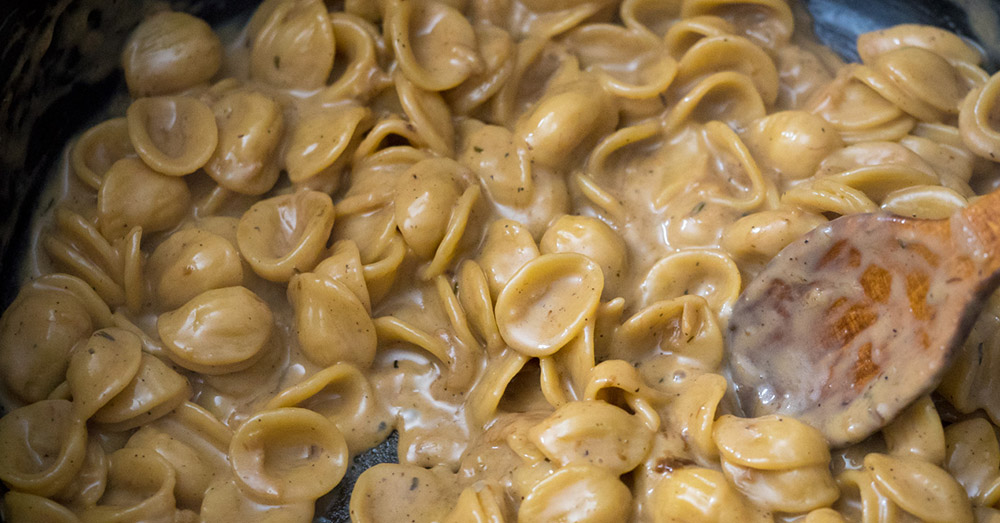 Pasta plus all the rich and savory flavor of French onion soup!

I’ve told you before how much I love one-pot pasta and I’m sure I’ll have the occasion to tell you again. Well, this one is certainly no exception. While it takes a little longer than other one-pot pastas (because caramelized onions, which there’s just no substitute for), it still comes together entirely in one pot, and yes, that means you don’t even have to boil the noodles separately. It has all the rich nuanced flavor of French onion soup with the added comfort of pasta, and yes, that means it’s every bit as good as it sounds.

As you might have guessed, you’re going to start here by caramelizing onions. The key to caramelized onions is cooking them low and slow, so don’t try to rush it by cranking up the heat or you’ll just end up with burnt onions. We don’t want that.

A little balsamic vinegar helps the flavor along, and then the pasta heads into the pot along with some beef broth, cream, and thyme where it simmers until the pasta is tender and much of the liquid has absorbed. (And yes, that means the pasta itself absorbs a lot of that rich flavor.)

And then, of course, there’s cheese. Because this wouldn’t be French Onion inspired if there wasn’t some Gruyere involved.

There’s plenty of it, and it gets stirred in until it’s stringy and melty and makes the whole dish even more creamy.

As I’m sure you can imagine, there’s nothing bad to be said about pasta that has all the rich, savory flavor of French onion soup. And this gets extra points because it also happens to be incredibly easy to make, which means that you can include it in your recipe rotation as often as you’d like.