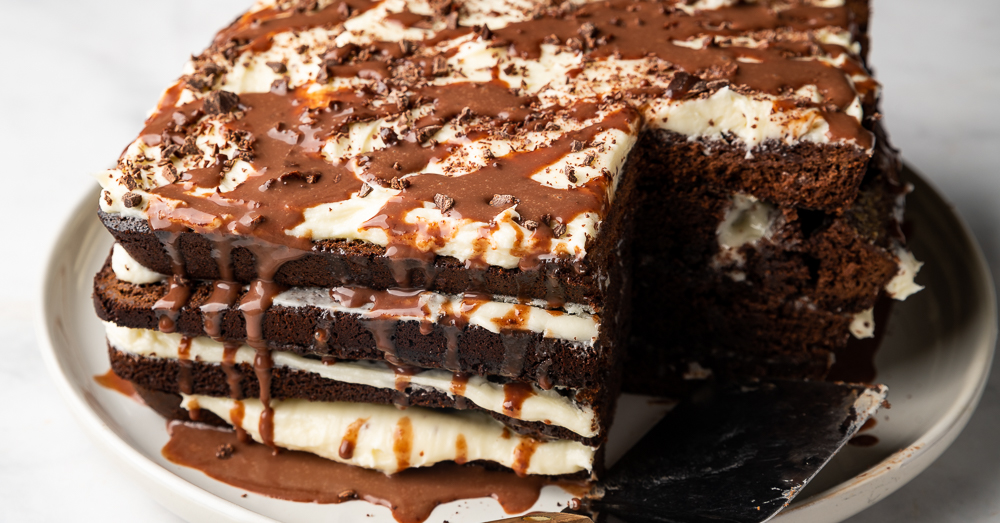 The kind of dessert your guests never stop talking about.

Are you looking for the most decadent, the most indulgent, the richest dessert you can imagine? Well, we more than have you covered and you can thank Olive Garden for the inspiration. Their Chocolate Lasagna is a lesson in sweet decadence with its four (yes, four!) layers of fudgy chocolate brownie-cake that sandwiches rich cream cheese frosting and is all topped off with a little more chocolate for good measure. It’s A LOT and it’s not at all ashamed of it, and that’s precisely why it’s so amazing. I have really good news for you — now you can make that same indulgence at home, and I can promise you that when you make it yourself, it’s the type of dessert that people will be talking about for years.

I have more good news. You can start with a box of brownie mix. Well, two boxes of brownie mix. (I did say there were four layers here.) You’re going to take those brownie mixes and you’re going to add everything the package calls for but you’re also going to add in a couple of additional eggs. This makes the mixture just a little bit cakier and better suited to layering. Don’t fret — it’s still plenty fudgy.

You’ll divide that batter between two square pans and bake it until it’s set. (Again, use the package instructions as a guideline here.)

While those marvelous brownie layers cool, you’ll make up a quick (but rich and delicious) cream cheese frosting. It’s butter and cream cheese and powdered sugar smoothed out with a little bit of heavy cream and vanilla extract. Basic, but perfect.

While that towering stack of sweet satisfaction chills, you’ll make a quick ganache in the microwave that you can then pour alllll over the top of the “lasagna.” I think chocolate shavings are entirely appropriate here too. After all, if you’re having something called Chocolate Lasagna, you might as well really go for it.