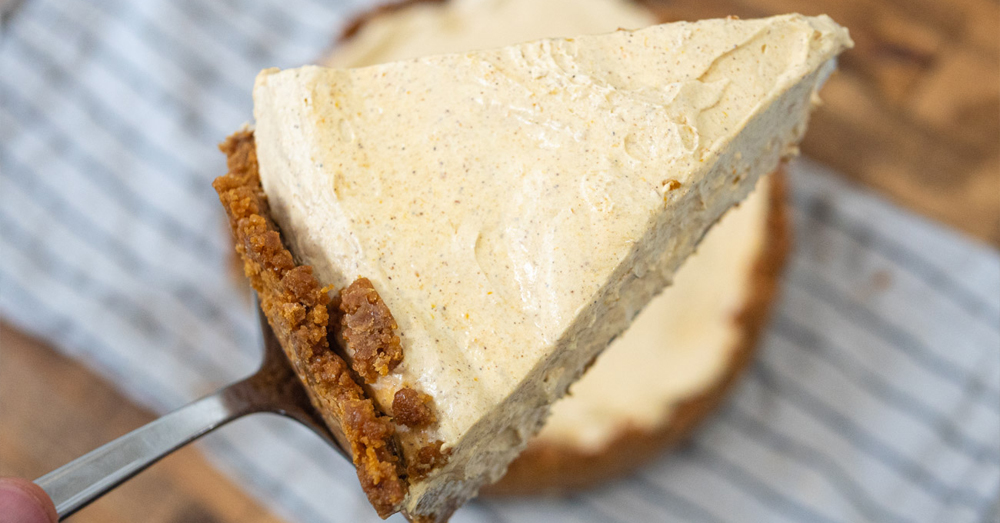 Fall is upon us, bringing cooler weather, shorter days, beautiful colors, and of course, pumpkin everything. Whether you indulge in a pumpkin spice latte or pick up a can of pumpkin spice Pringles (seriously, it’s a thing), autumn is definitely the season to get your pumpkin fix in!

While I love a good pumpkin pie, I was looking for a different kind of recipe. Something a little lighter, a little sweeter, and that didn’t require an oven. That’s where this No-Bake Marshmallow Pumpkin Pie came into play. After my first bite, I knew I had hit the jackpot.

Let’s talk about the specifics, starting with the crust. There are just two ingredients, but I think you’ll agree they’re the best two ingredients; gingersnap cookies and butter. Yeah. Game changer. The gingersnap crust compliments the light, fluffy taste and texture of the filling, giving it that extra boost of spice along with a nice crunch.

Now let’s move on to the filling. I don’t know if you’re ready for the decadent deliciousness that is marshmallow pumpkin pie. There’s cream cheese and powdered sugar, which give almost a cheesecake flavor to the whole thing. Next you have pumpkin puree, of course, followed by marshmallow cream and cool whip. There’s some cinnamon, vanilla, and pumpkin pie spice in there as well.

Like I said, sweet, rich, and perfectly spiced. And don’t forget that gingersnap crust! The best part is how easy this all is to throw together. Put the cookies in a food processor until fine crumbs form, then mix with butter and press into the pan. After that, it’s just a matter of mixing the remaining ingredients together and pouring it into the pan. Let chill for 4-6 hours and then serve up with some more whipped cream and a dash of pumpkin pie spice.

There’s no doubt about it – this No-Bake Marshmallow Pumpkin Pie will definitely have a place at the Thanksgiving table this year! Check out the recipe below to try out this new pumpkin dessert.

For the Pie Filling: