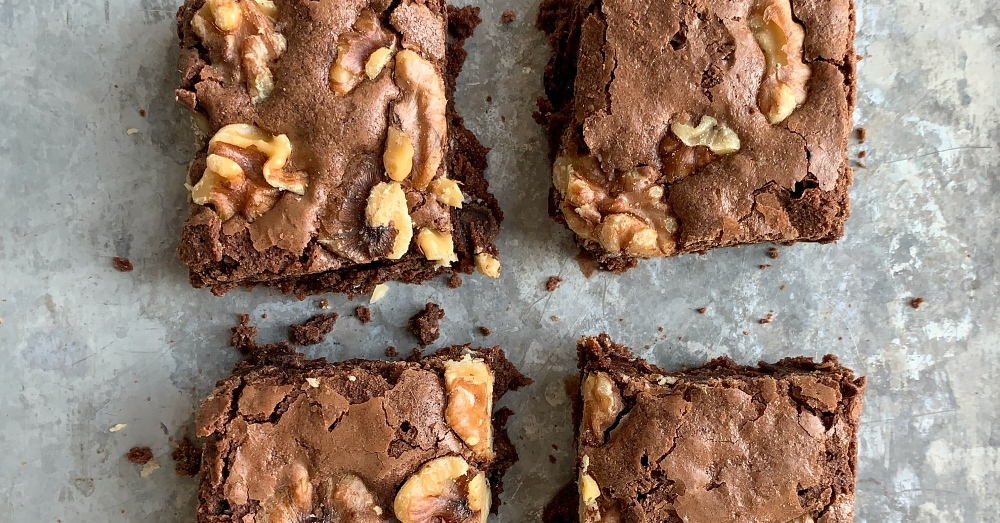 Star or not these are simply delicious.

Katharine Hepburn was known for her incredible acting abilities and her devil may care attitude. The star was also fiercely independant and hated wearing shoes. She favored doing things her way and was known for being quite bossy at times, though with a big heart and hidden humility. Her particular way of doing things is also evident in a certain story about her famous brownie recipe, a fudgy concoction with that thin, crispy layer on top and a dense center.

The story goes that some of Hepburn’s neighbors when she was living in New York had brought her some homemade brownies as a gift. She pointed out that the brownies had too much flour and had been over-baked. But, ever generous of spirit she gave these neighbors her family’s own rich walnut brownie recipe. From the there this legendary recipe was published in a cookbook by Dorie Greenspan. Since then lovers of both Old Hollywood and of moist brownies have been flocking to this recipe.

Unlike some brownie recipes this one does not rely on cocoa. Instead you’ll need to melt 2 ounces of baking chocolate over a double boiler along with a 8 tablespoons of butter. Then whisk in the eggs, vanilla, and sugar. Then you fold in the dry ingredients and finally in go the walnuts.

These brownies do have a lot of walnuts in them so if nuts aren’t your thing then it might fall flat without them. Likewise, if you’re looking for a cakey brownie these aren’t like that at all. No, these brownies are rich, never dry, and are chocked full of nuts.

To remove these from the pan you’ll need to line the pan before your pour in the batter. cut 2 strips of parchment paper and place them going different directions across a 9″ square pan. Make to leave some overlap over the sides as well. That way you can simply lift the brownies out once they’ve cooled after baking. I can remember the old days and having brownies always sticking in the corners. This simple trick eliminates that forever.

Enjoy these perfect brownies with some cold milk or a hot beverage for a real treat and a nod to Old Hollywood starlets. Even celebrities need their domestic comforts it would seem.