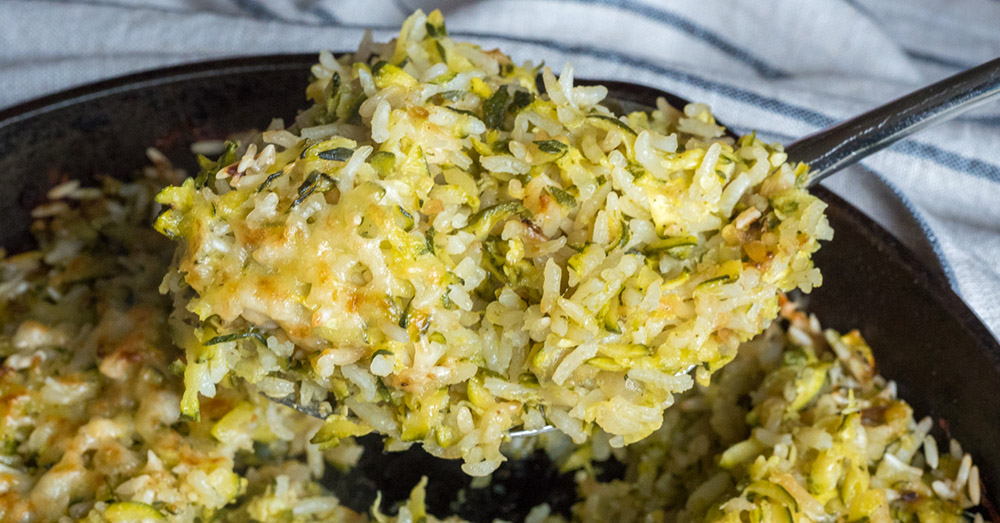 Another triumph from Julia herself.

As is the case with so very many of Julia Child’s recipes, this is an absolute triumph. It’s made up of simple ingredients that are prepared well, but I guess you could say that’s kind of a Julia trademark. It’s a gratin that manages to feel comforting but not heavy while using up a bounty of zucchini but still totally delivering in the taste department. It’s easy to prepare and easy to love and I’m as sure as I am of anything that I’ll be making it again and again.

So, in all honesty, this isn’t Julia Child’s exact original recipe. It’s simplified the teeniest bit in a manner suggested by Deb Perelman of Smitten Kitchen, so you don’t have to drain the zucchini or parboil the rice. Julia originally calls for shredding, salting and draining the zucchini, and then measuring the leftover liquid and adding it back into the recipe. We’ve tried Deb’s version, where you just add the zucchini and its juice into the recipe as is and it works beautifully. You just grate up the zucchini…

… and sauté some onions and garlic until they’re lightly brown and fragrant.

The rice takes a quick turn in the pan too, just to toast it a bit and then it all gets mixed together with the zucchini, a half cup of milk, and some Parmesan cheese. As it bakes, the liquid releases from the zucchini and cooks the rice to tender perfection.

Once it’s soft, you uncover the dish and top it with a bit of butter and a light dusting of Parmesan and give it a chance to brown up a bit. It tastes ‘fluffier’ than most gratins, as it’s not weighed down by heavy cream or dense potatoes and yet it’s totally filling and delicious. The zucchini and the rice end up almost blending together and while it doesn’t have a ton of ingredients, it does have a ton of flavor. As Julia once said, “You don’t have to cook fancy or complicated masterpieces – just good food from fresh ingredients” and that’s just what she’s done here.