How to Use Left Over Bacon Grease

Keeping and using bacon fat has been a revelation. For a person that eats a lot of bacon – my wife and I even acknowledged it in our wedding vows – my ignorance regarding the re-use of rendered bacon fat and grease was startling. I had no idea the range of uses that the fat from crispy delicious bacon could provide in the kitchen. I never thought much about it, either sopping up grease and fat with bread for the puppies, wiping the pan out with paper towels, or putting it in a glass jar with other discarded oils for later disposal.

Now though, my world of bacon has expanded, and I’m delighted about it. Below I’ll share some of the best hints and tips for using bacon grease and fat, while I’ll also explain the best methods of extraction and storage.

Whenever I cook a large batch of bacon – the crispiest yields more fat – it’s a simple matter of pouring the still hot contents of the frying pan through a piece of cheesecloth (you can use a paper towel) and into a jar that can accommodate a tablespoon. I prefer not adding old grease to new, so a small jar or jars that you can date and label works effectively. To make sure it lasts longer, you can store your container in the fridge or freezer. 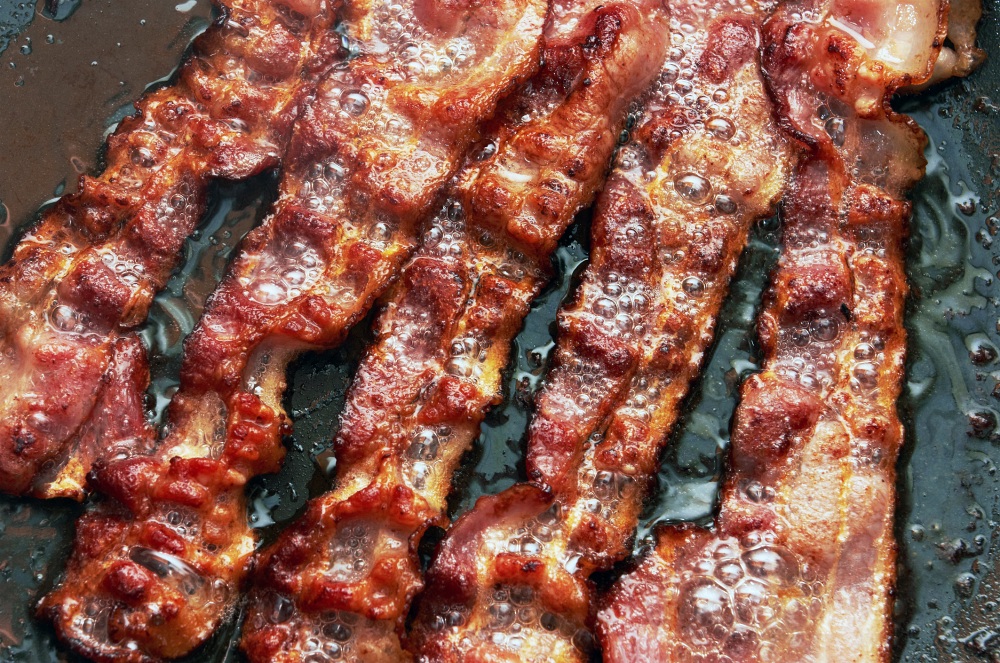 The Japanese term umami describes rendered bacon fat perfectly. Umami’s the savory, salty texture that our taste receptors respond to at a basic level. Putting bacon flavor into your cooking adds a wonderful layer of flavor to so many different meals. For me, the simplest and most enjoyable use for bacon grease is when cooking chicken. Whether it’s breast pieces, thighs, or even drumsticks, the chicken soaks up the flavor imparted by bacon fat, which also supports traditional blends of herbs or basic sauces.

Almost as enjoyable but not quite in the same class is using bacon fat to flavor up baked potatoes. Much like the more widely deployed duck fat potatoes, the grease adds an extra layer of taste but also helps give them a crispy, golden sheen while retaining a deliciously soft interior. Bacon fat is also really good for use in meals where the sense of bacon is more important than the bacon itself. A simple pasta dish with few ingredients, a touch of flavor to your pancakes, or as ballast for French Toast are areas where bacon’s umami flavor works brilliantly.

One thing I’ve yet to try but am keen to try out is cooking tortillas like in the great clip below from Rick Martinez, they look absolutely delicious!

I’m not much of a baker, however I’m a huge fan of Southern cooking, which means that’s going to have to change. The best southern cooks know all the best ways to utilize bacon fat, so naturally that’s where I’ll get learning. The clip below shows off a simple, old school method to make drop biscuits that I’d like to incorporate into my routine, especially when we’ve got visitors and I want to go that little extra.

The really exciting thing for me is using bacon grease in baking sweet treats, a concept I would have thought mystifying a few months ago. Adding that salty, umami flavor to a batch of Bacon Fat Caramels is now a lot further up the list of things to do than it was a short while ago!

I don’t need an excuse to cook more bacon. I’m happy to do it and keep the grease if it means I can establish my new love of umami flavor. Do you use bacon fat for your cooking, and if so, what’s your favorite creation?