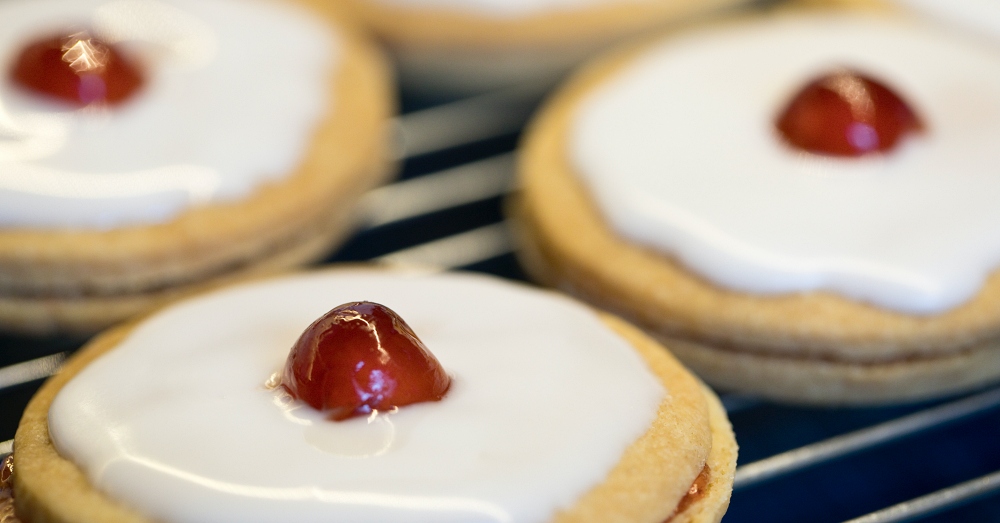 It was once said that the sun never set on the British Empire, with territories in India, the Americas, Africa, East Asia, Australia, and beyond. But, along with the World Wars came the re-drawing of the maps as the colonies reclaimed their independence.

During World War I the empire was still quite strong, but the war with the Autro-Hungarian Empire had an impact on everything from borders to music to food. The popular Linzer cookies (also called German biscuits) were seen as too German by those living in the UK. The recipe stayed much the same, but these jammy cookies were re-named as empire cookies, which was supposed to sound more British.

Whatever you call them these cookies are delicious and will make the table look festive any time of year.

To begin making these cookies cream together butter and sugar. Then add in 1 egg and stir again. Stir in flour until a crumbly mixture forms. Then turn out the dough onto a floured work surface and roll out to 1/8″ thickness. Cut out cookies using a 2″ or 2.5″ cookie cutter. You should end up with 40 thin cookies.

Bake for 15-20 minutes and then allow to cool for 10 minutes before removing to wire racks to cool completely. You definitely don’t want to try and glaze hot cookies so let them cool all the way before decorating.

Spread some of the raspberry jam on 20 of the cookies. Add the other 20 cookies on top to make 20 sandwich cookies. To make the icing mix together confectioner’s sugar with milk until a thick glaze forms. If it’s too thin it will roll off the cookies. Spread some glaze on top of each sandwich cookie and before they set add a halved Maraschino cherry to each one.

These are beautiful piled up on a tiered platter for teatime, but you don’t need to have a formal excuse to eat these luscious, fruit-filled cookies. Thanks to their delightful flavor these treats are perfect for just about any occasion.