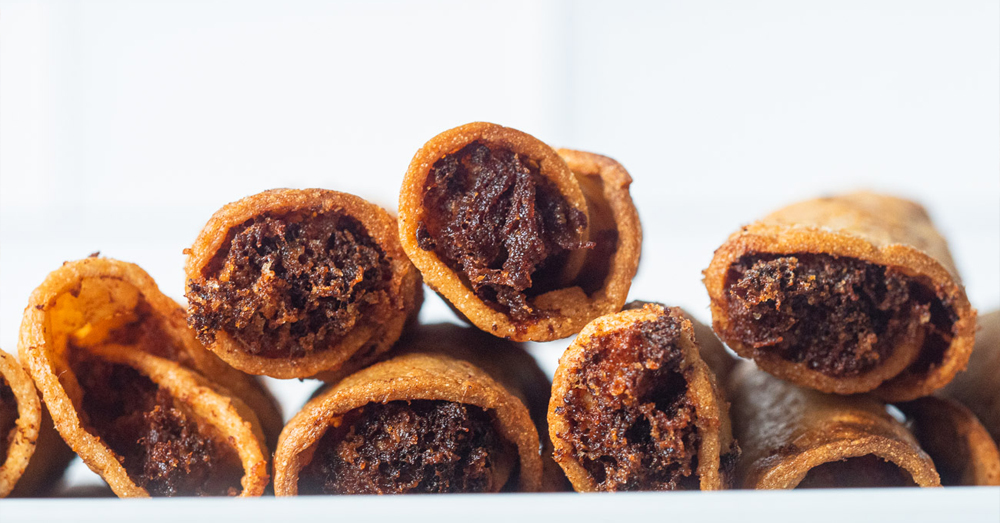 The filling is SO delicious – and you can bake or fry them!

I have really only ever thought of taquitos as two things – one, a delicious appetizer you order at a restaurant, or two, a frozen food you buy to have on hand when a snack craving hits. I don’t know why I never thought of them as something to make from scratch in your own kitchen, but this recipe sure changed that. See, instead of just a basic seasoned chicken filling you might get with a pre-made option, these have an incredible zesty, creamy and cheesy thing going on. They’re deeee-licious and easy to make… And don’t feel like frying? No worries – we’ve got baking directions for you too.

What makes these so special is the filling. It’s not just chicken and spices. It’s chicken and cream cheese, sour cream, green chiles, cumin, garlic powder, salt, and Monterey Jack cheese. Which is to say, these are really flavorful. And really creamy. And cheesy too.

You just line a tortilla with some of that filling, roll it up, and get to frying. You’ll want to work in batches in about a half-inch of hot oil and cook them until they’re nice and golden brown and crispy. You don’t need a deep fryer or anything complicated, a quick pan fry works really well to get that amazing crispiness.

But if you don’t want to fry these, you can still get deliciously crispy taquitos in the oven. You’ll just want to spray the rolled taquitos with oil to encourage browning and pop them in a four-hundred degree oven for about fifteen minutes.

In the oven, they still get a nice crunch… maybe not quite as crunchy as when they’re fried but it does mean you can make them much more often without worrying about the ill-effects of fried food. Baking them makes them into a more everyday afternoon snack, frying them takes them to indulgent party or late-night fare.

However you choose to make them, the most important takeaway is this – they’re probably going to take front-runner status as the most delicious taquito you’ve ever had.