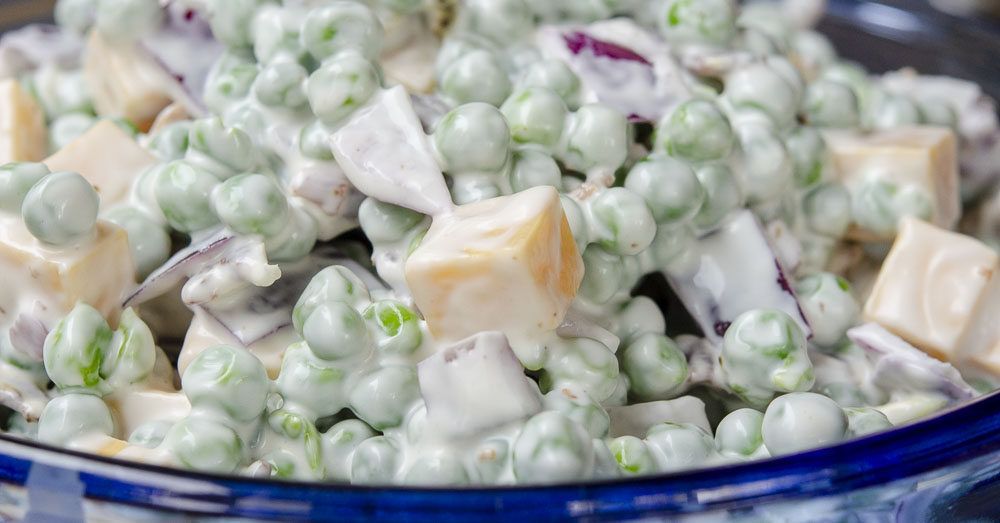 Pea Salad isn’t something that you see all that often at potlucks and picnics anymore. Pasta and potato salads seem to be the more ubiquitous choices, and while those are definitely classics, there should be room for pea salad on the menu too. It’s a classic in its own right — you might remember your mom or even your grandma serving it, but I think it’s high time that it had a revival. It’s incredibly creamy, it’s sweet, and has pops of salty bacon and sharp red onion and cubed cheddar cheese. In other words, it has all the flavor you could hope for… and it takes just about ten minutes to make. It might feel a little old-fashioned, sure, but it definitely has its place on today’s table. After all, a little nostalgia never hurt anybody.

This really is ridiculously easy to make. You’ll start with the dressing, which is a base of sour cream and mayo that’s balanced out with a little bit of sugar and some apple cider vinegar. You whisk that together and then add in thawed frozen peas, — four whole cups of them! — some chopped bacon, diced red onion, and some bite-sized cheddar cheese.

That’s it! You stir it all together and chill it until you’re ready to serve. If you’re worried about your bacon losing its texture, you can sprinkle some more on top at this point so you have some bacon flavor running throughout but still a bit of crunch.

It’s about as simple as a side dish can get but it’s one that’s so easy to love. With a little bit of sweet, a little bit of salty, just enough tang, and plenty of creaminess, it’s definitely a crowd pleaser. Even if it’s not a nostalgic dish for people, they still seem to love it… and really, how could you not?

Recipe adapted from The Recipe Critic.