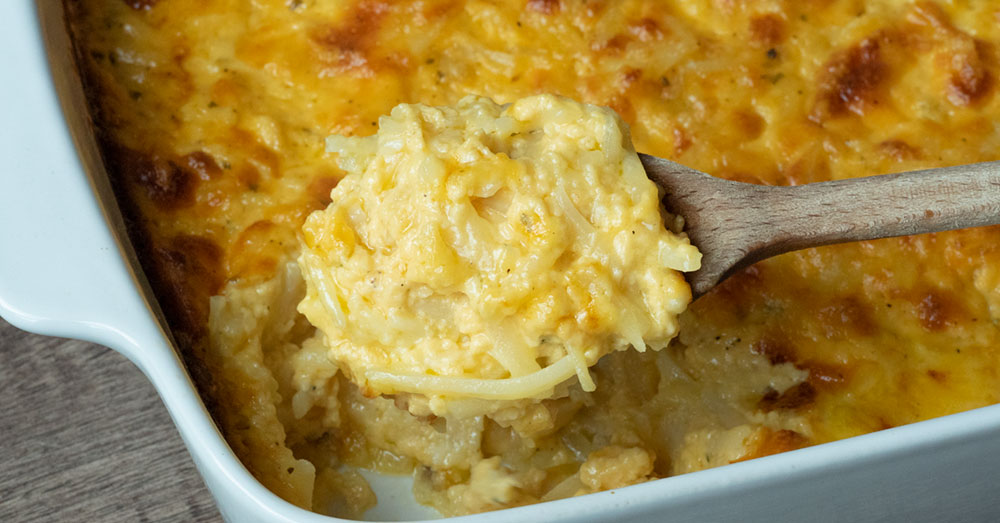 Let me start by saying that the name Delmonico Potatoes is far fancier than this dish actually is. Because all this dish is… is hashbrowns and cheese sauce. Granted, it is a homemade cheese sauce so it’s not all about shortcuts, and I can promise you that it certainly feels special, even one bite in. Perfect as a cozy side or as an accompaniment to a more formal meal, it’s a cinch to make no matter when you serve it.

Delmonico Potatoes originally come from their namesake, the Delmonico Steakhouse in New York City where they were created all the way back in the 19th century. While the original featured diced potatoes and breadcrumbs, this version is a simpler affair. (But it tastes every bit as delicious and indulgent.)

I have good news for you. You get to start with a bag of frozen hashbrowns here. You do have to thaw them, but there’s no grating or squeezing out liquid from potatoes to be done. Just set that bag on the counter for a while, open it up, and dump it in a baking dish while you get to work on that cheese sauce.

And that cheese sauce is easy too. There’s no roux, no slurry… you simply heat up some milk and cream in a saucepan, season it with ground mustard, garlic powder, parsley, and black pepper, and then stir in a very generous helping of grated cheddar cheese.

It’s not a thick sauce, it’s not a terribly fancy one either. But then again, neither are frozen hash browns, and yet somehow when you combine the two and bake them into bubbly cheesy oblivion, they become something so much more.