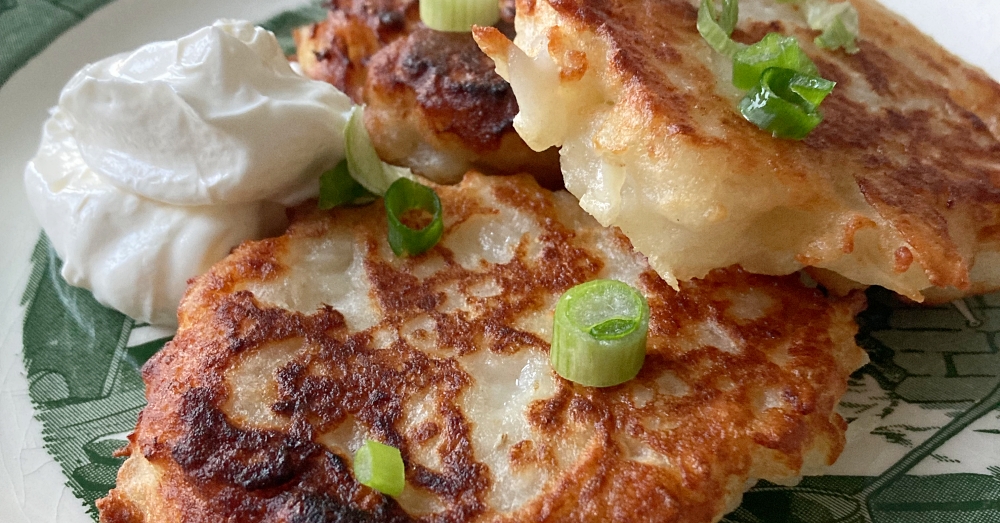 Crispy outside, fluffy inside.

Of all the Irish recipes that get passed around online, these boxty stand far and above some of the less traditional ones (green cupcakes, I’m looking at you). But, boxty is such a staple in Irish cooking that there are several rhymes about it! Ones goes, “Boxty on the griddle; boxty on the pan. If you can’t make boxty, you’ll never get a man”. But, some variations say that if you don’t eat boxty you’ll never land a man. Either way, these tasty potato pancakes are a fun way to enjoy Irish cuisine.

It is said that there is a version of boxty that was popular around Samhain (Halloween) that was layered with apples and sugar and given as a treat.

Lest there be any confusion, there is also an Irish bread called boxty which also uses potatoes in the dough. Today, we’ll just be focusing on these crispy, fluffy potato pancakes.

Unlike most recipes for latkes which use only grated potato in the batter, boxty uses a blend of mashed potatoes and grated raw potatoes. This hybrid approach results in a lofty center with a crispy exterior. It’s sort of like the best of both worlds between latkes and leftover mashed potato pancakes.

To make the mashed potatoes you don’t need to add milk or butter or anything. But, they don need to be chilled completely before adding the other ingredients. Basically you boil and mash 2 potatoes and then grate 1 potato.

The mixture gets some lift from baking powder and gets some stability from all-purpose flour. Then the secret ingredient of buttermilk is added to give a creamy, ever-so-slightly-tart flavor. To avoid the mixture coming out too wet only add 1 1/2 cups of buttermilk to start, then add more if needed.

Then you fry them and serve them with sour cream and chopped green onions. There’s no pepper in this recipe, which means if you prefer your potato pancakes with applesauce then it goes perfectly.

Serve these alongside sausages, chicken, or fish for hearty meal that really sticks to your ribs. It’s amazing how far 3 potatoes can stretch when you make them this way. And, you couldn’t ask for a more delicious way to have them.