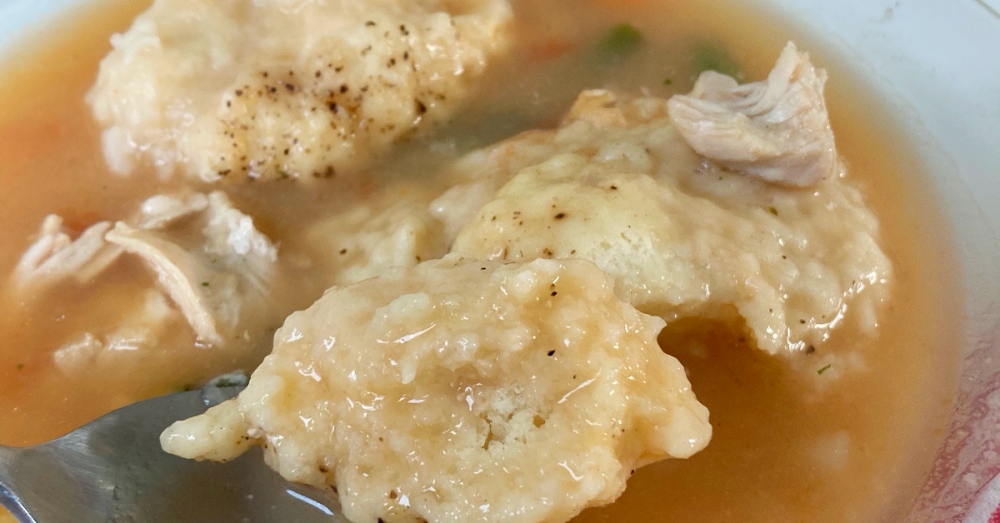 Dumplings in most parts of the world are filled, but in the Southern tradition these plain balls of dough (also called “slicks”) go into a boiling pot of soup or stew. The most classic of these combinations is with chicken soup, which is the perfect way to make these never-fail dumplings. This recipe uses just a few simple ingredients to create large dumplings that rise and never (ever) fail on you.

To begin combine all your dry ingredients into a mixing bowl. In a small bowl whisk together milk and egg and then slowly add this to the dry ingredients. Once you stir them together you’re left with a sticky, wet dough. Bring your soup or stew to a low boil and drop in 10 dumplings using 2 spoons to make oval shapes from the dough.

Liberally sprinkle some black pepper on top and then cover with the pot lid. Then for the really easy part: you don’t open the lid or even look at the dumplings for 20 minutes. When you do open the lid you’ll see that the dumplings will have increased in size and are now perfect.

You can use any stock-based soup you’d like as the “base” for these dumplings. For this recipe I used the leftovers of the stone soup recipe and added some extra chicken broth to it. Since this soup has tomatoes in it the dumplings came out with a little extra color on them. If you’re using a soup that has a lot of colorful spices (like paprika or turmeric) or tomatoes then just know that this will color your dumplings a bit.

This is an easy way to make a one-pot meal. Top a veggie-laden soup with these and you’ve got your dinner all sorted out. And as far as leftovers, these actually keep really well in the fridge for a few days and don’t disintegrate right away.

These never-fail dumplings are literally the best Southern-style dumplings you can make, period.