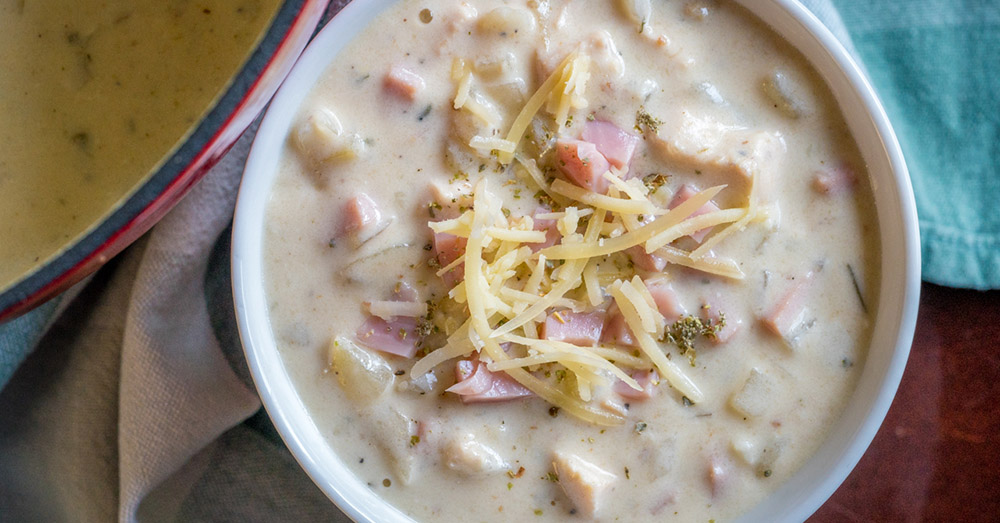 And it’s way easier to serve a crowd with this version of the classic.

Did you grow up eating chicken cordon bleu? Its popularity seems to have faded a bit, but we’ll always have a soft spot for those chicken, ham and swiss cheese roll-ups that, when you cut into them, have a perfect spiral of all the ingredients. We were thinking the other day about how much we used to love this meal and how tasty it always was, but realized we didn’t want to make the traditional version. Which is when we realized we could take all the components of the classic and then just reinvent them a bit…which is exactly what we did.

So obviously we’ve got chicken, ham and Swiss cheese in this creamy soup, but we also wanted to beef it up a bit, so we added potatoes and onion, then seasoned it with plenty of garlic, Dijon mustard and parsley, for a bit of bite and freshness. As for making this as thick and creamy as possible, we started with making a roux that gets stirred in at the end and really thickens the soup up and makes it extra hearty and filling. You’ll want to whisk the flour into the melted butter and cook that until it’s nice and golden, then you’ll pour in the whole milk, whisking and cooking it until the mixture thickens. A roux is perhaps not the most appetizing thing on its own, but knowing how good it makes the finished product gets us super excited – this soup is so tasty!

It’s hard to fully describe how much this soup captures the essence of chicken cordon bleu. While it’s a bit different, what with the addition of the potatoes, but at the same time, everything works together beautifully and you end up with a dinner that both fills and warms you up. If it’s chilly out or if you’re looking for a dinner that’s easy to put together after a busy day – and that you’ll have yummy leftovers of – this is the right choice, you’ll see!

Recipe adapted from The Girl Who Ate Everything