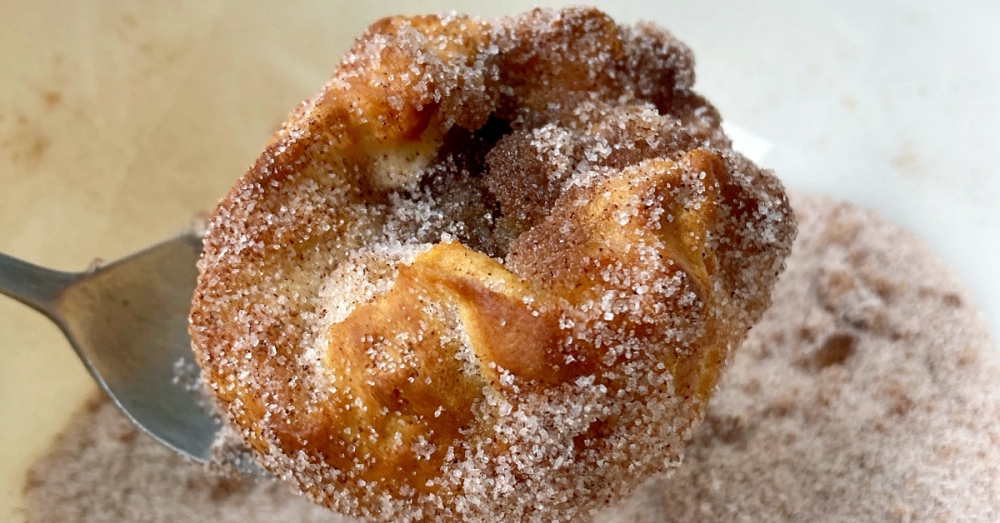 Apple pie is one of those complex flavors that is pretty much universally appealing. But, making a pie from scratch not only requires a lot of effort, it also takes up the oven for a long time. These air fryer apple pie bites don’t take a lot of know-how to make and don’t hog the oven- which is perfect for when you’ve got other things to bake. Plus, this fun recipe is great to do with kids for a special treat that’s anything but ordinary.

To make this recipe you’ll need to buy some canned biscuits and then split each one as shown above.

Then flatten the dough a little and place some apple pie filling inside. You can make your own from scratch or buy canned from the grocery. I went the easy route for this recipe, but whichever one you choose just know that you’ll probably need to break up the apples a bit to fill the dough. I found that each circle of dough comfortably held about 1.5 apple halves- any more than that and they became difficult to seal up.

To seal them I crimped the tops, then sort of rolled them around to make more of a ball shape. I found that placing them seam side up in the air fryer meant that they didn’t leak any filling- even when a few of them popped open from the heat.

When they get all golden on the outside take them out and dip each ball in melted butter.

After that coat them in a mixture of sugar, cinnamon, ginger, allspice, nutmeg, and cardamom. Make sure to coat all sides well.

These air fryer apple pie bites are little drops of heaven. The rich flavor is almost like a cross between a piece of apple pie and an apple-filled donut dipped in sugar. For an outstanding take on an American classic, look no further than this easy and decadent recipe.

Recipe adapted from I Am Baker.